So it’s February 2010 and “25 Books” was my 2009 challenge. I’m not going to tell you (yet) how many books I read and how many points I accrued, but I will say that I’ve nearly finished book 2 of 2010. So obviously I’m a bit behind on the corresponding blog posts. My goal for 2010 is to try not to get more than one book behind (once I’ve caught up that is.) 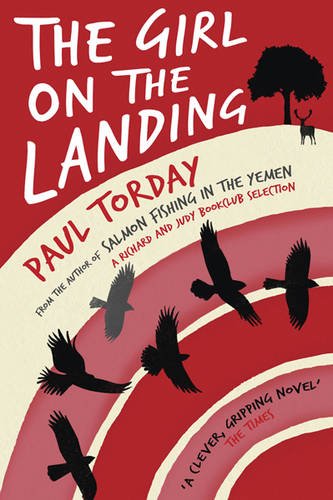 The Girl on the Landing is the story of Michael and his wife Elizabeth. Whilst staying with a friend in Ireland he sees an intriguing picture of a girl on the landing of his friend’s house. On mentioning it the next day he discovers that the picture in question has no girl in it. This odd occurrence marks the beginning of changes in him, his marriage and his life in general.

I bought this book one day when I was browsing in Waterstones and liked the blurb on the back. I was in my “forget-the-list-lets-just-read-something-enjoyable” phase. It turned out to be a good choice but I wasn’t sure of that initially. I wasn’t sure I was going to be able to relate to the main characters. Michael is very rich and his life seems to be like something out of a period novel about posh folk. He’s very rich and owns a large estate in Scotland. He lives in London and his pass-the-time job is working for an exclusive club of which he’s a member. I swear the first 50 pages or so I kept looking for clues of when it was set because I was sure it was going to turn out to be the 1930s.

That was a minor concern though and faded once I got into the story. The transformation in Michael as a person and the growing effect it had on his marriage I found interesting. I was rooting for them as a couple who, having been married for some time found themselves perhaps for the first time falling really in love.

However as the pace of the story picks up there’s a kind of is-it-real supernatural element mixed with almost a crime thriller. Both of these in different ways had me intrigued as to what was going to happen next and what it meant. I found it quite exciting and intriguing and the early part of the book had made me care about the characters so that was all the more affecting.

I can see how some might see it as a strange mix of genres but that honestly never bothered me.

8/10 – an odd mix of romance, thriller and ghost story – but one that worked for me.

This entry was posted in 25 books, reading, reviews and tagged books, crime, mystery, paul torday, review, supernatural thriller, the girl on the landing. Bookmark the permalink.